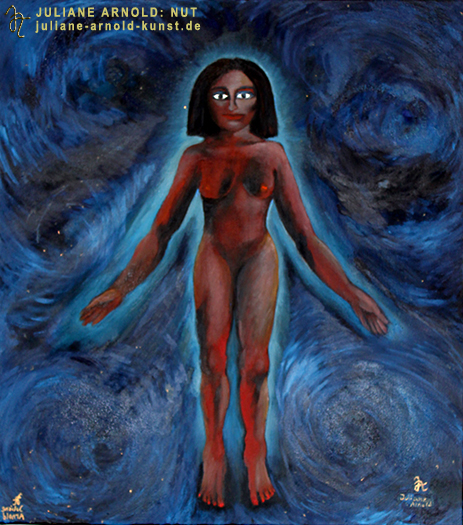 The GOD shows itself today as a dark skinned woman.

Humans do think that the highest of all is a white old man with a silver hair and beard.

This, because Michelangelo Buonarotti painted god like this on the catholic sixtina chapel.

Theo old egyptian way ist to see god in everything. It manifests itself in light and in darkness. Light god Ra is the sungod. The christian imagination of a god is a light god. His rebirth is celebrated in much cultures as the rebirth of the sungod. This, because the darkest day of the year is at December 21 after that the light comes back.

Mightier as the sungod is the universe. Inside the universe the suns and stars are included little points of light. The universe is, what we see at night. Night was the name of the universe goddess in old egypt: Nut (egyptian), Night (english), Nuit (french), Leila (hebrew), Nacht (german), Notte (italian).

Old egyptians painted the night as a female body. This is the symbolic firmament on the sky. You see her at night. In the evening the sun disappears. It is away for hours. In the morning the sun comes back. So they painted the night as the goddess, who bears the sun-god at morning and eats him in the evening. The goddess in this way is the manifestation of rebirth and dead. She is a dark skinned woman with a starlight – pointy-lighted body. So the old egyptians thought that the mother goddes takes care of you, when you die at the evening of your live. She takes your soul back into her womb. It takes a time, where you lie in her lovely arms and grow again inside her waist. She is the mother who brings your soul back to live in the morning. This is the holy principle of the female and the femals goddess. The male light god cannot exist without the bearing mother.

Christians do paint the holy mother with the blue coat, which is the tradition of painting the great mother who brings back the son- sun-god. The light bearer is the universe, the female principle. Without her, no sun could exist nor shine in the universal firmament.

The goddess nowadays is almost forgotten. Chirstians name her Madonna or Maria, muslims name her the mother of Mohammed, Fatima. All names of the goddess mean the same: The mother, of who we all come from. To us all, she gave birth and rebirth and she will take care of us in our dying and make us young again.

People on earth nowadays mistreat the female in a brutal way. It is not respected and not loved and the goddess is forgotten. The male dominated culture only respects the sun -god. They dispise the female principle. 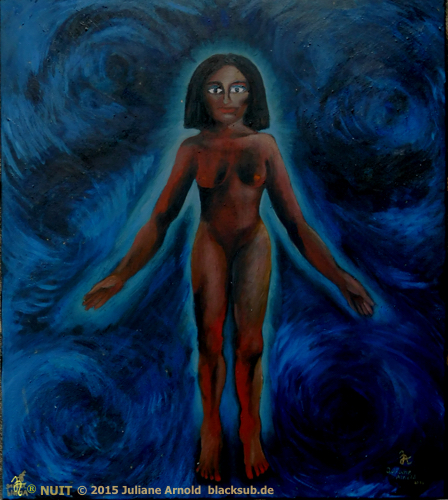 So i want to show and remember you in this picture. That the highest god is also living in the female principle, whithout nobody on earth could exist. It is the female black body, as it is painted by the old egyptians, one of the oldest religions of the earth, in which all the other religions have roots. I must admit that I saw this pretty young woman in my dreams and I painted her to remember, what GOD wants to say to us and to me: That GOD has no sexual gender, it is the universe, but that the female goddess principle is as mighty and important as the male is. She is angry about the mistreatment of the humans and so she wants that we see her female form, as she manifests in a young black woman. Young dark skinned women are the most discirminated and dispised people among humans. And so I want to tell you, that the highest goddess manifests in these persons as much as she does in male beardy old white men.